In 1887, Taiwan was designated by the Qing government as an independent province of China. Qing court official Liu Mingchuan was appointed as the first governor of Taiwan. He quickly opened the first railway in Taiwan; construction began in the same year.

However, the Qing rule in Taiwan did not last long. After the end of the First Sino-Japanese War in 1895, control of Taiwan was transferred to the Japanese Empire. When the Japanese arrived on the island, they were frustrated with the poor quality of the railway. The Japanese government subsequently established the Ministry of Railways in Taiwan. The Ministry of Railways in Taiwan quickly started work by rebuilding existing lines and also formulated ambitious plans to build a railway connecting Daegu (now Kaohsiung) and Keelung.

Railway work began immediately. In 1908, residents of Gaole took the train to Keelung for the first time. The entire project cost more than 7 million yen. Even after the completion of this landmark project, the Ministry continued to develop the railway infrastructure. Next, it turned its attention to the east coast of Taiwan and tracked it all the way to Taitung.

1945 was the inauguration ceremony of modern Taiwan in the Republic of China. The government of the Republic of China established the Taiwan Railway Administration (TRA) to take over the operation of the Ministry of Railways in Japan and Taiwan. To this day, the development and operation of Taiwan’s railways are still booming. The construction of Taiwan's high-speed rail is a highlight of the modern Taiwan railway system, which was opened in 2007.

Today, Taiwan’s railway system is very convenient and cost-effective, and has become the main mode of transportation for most people, whether it is between cities or within cities (for cities with subway systems). In fact, high-speed rail is so popular that it has caused the suspension of many domestic flights! In 2016, Taiwan trains carried more than 1.09 billion passengers, an average of about 3 million passengers per day. Taiwan Railways has several different types of vehicles. The most high-end is the Ziqiang, and Ziqiang has two new types of Ziqiang, the Puyuma and Taroko. Although the Puyuma is faster than the normal style of Ziqiang, the price is the same. Both the Juguang and Fuxing are matching trains, but they are slower but cheaper, and only a few flights are left. Shuttle trains and Shuttle Express trains are non-matched trains, and they are free-seating trains without the need to purchase tickets in advance. As the shuttle bus stops at many stations, the speed is very slow. Shuttle express is currently a higher CP. It uses a new type of train with fewer stops and a speed close to that of the Ziqiang, but it only charges cheap fares for the shuttle. Ziqiang (Puyuma and Taroko are variants of Ziqiang) is the fastest and has the fewest stops in the middle. However, most of the tourist hotspots frequented by Hong Kong people will stop at the stations, and the fare is more expensive than other trains. The seats are the widest, and there are two types: counter seats and free seats

Puyuma and Taroko can not be used to progress with the travel card, and the Ziqiang number can be used, but it is a standing ticket.

It is strongly recommended to buy tickets early. Both the Juguang and Fuxing are matching trains, but they are slower but cheaper, and only a few flights are left.

Non-matched trains are free-seating trains without the need to purchase tickets in advance. As the shuttle bus stops at many stations, the speed is very slow. Shuttle express is currently a higher CP. It uses a new type of train with fewer stops and a speed close to that of the Ziqiang, but it only charges cheap fares for the shuttle. Alishan train is hard to get a ticket during the tourist season, because everyone wants to go to Alishan to watch the sunrise, and the train is a specialty of Alishan! Imagine an exquisite retro train traveling deep in the mountains, very romantic. The Pingxi Line is connected to tourist attractions such as Houtong, Shifen, Pingxi, Qingtong, etc. by car from Ruifang, New Taipei City. In the early days, it was a branch line for coal transportation and later became one of the most popular one-day branch lines for Taiwan Railways. The nostalgic scenery of the railway along the line is simple, as long as you buy a one-day Pingxi line ticket, you can get on and off the train as many times as you want in one day, and enjoy all the stations of Pingxi, Houtong Cat Village, Shifen Waterfall, Qingtong Old Station and Pingxi Old Street At the end, the sky lanterns must be put on to pray for blessings, just because there are not many shifts, you must arrange the time and pay attention to the schedule. The Neiwan Line in Hsinchu runs through Hsinchu, Zhudong, and Hexingda Neiwan Stations. It is recommended not to ride directly from Hsinchu to Neiwan. There are few trains, so it is best to transfer from Zhudong to the train every hour. Neiwan Old Street is the most famous along the Neiwan. In addition to traditional Hakka cuisine, Neiwan Theater, Neiwan Suspension Bridge, and Liu Xingqin Museum are all worth visiting, suitable for family outings. The Hexing Station is the legendary Love Station. In recent years, there are more and more tourists because of the lavender forest. Nantou Jiji Line is well-known for its gameplay. From Changhua Ershui, Jiji, Shuili to Checheng Station, the scenery along the way is super beautiful in Nantou. It was an important town in the wood industry in the early days, and later became a wood industry exhibition center and a wood industry education park. You can visit the interior to understand the history of Nantou Wood at that time, and there are many DIY activities. The nostalgic buildings of Jiji Station also attract many people. Well-known scenic spots along the line include Shuili Snake Kiln and Jiji Old Street. You must try banana crisps when you go.

There are several ways to buy discount tickets. The xmove App shows a 20% discount for foreigners. 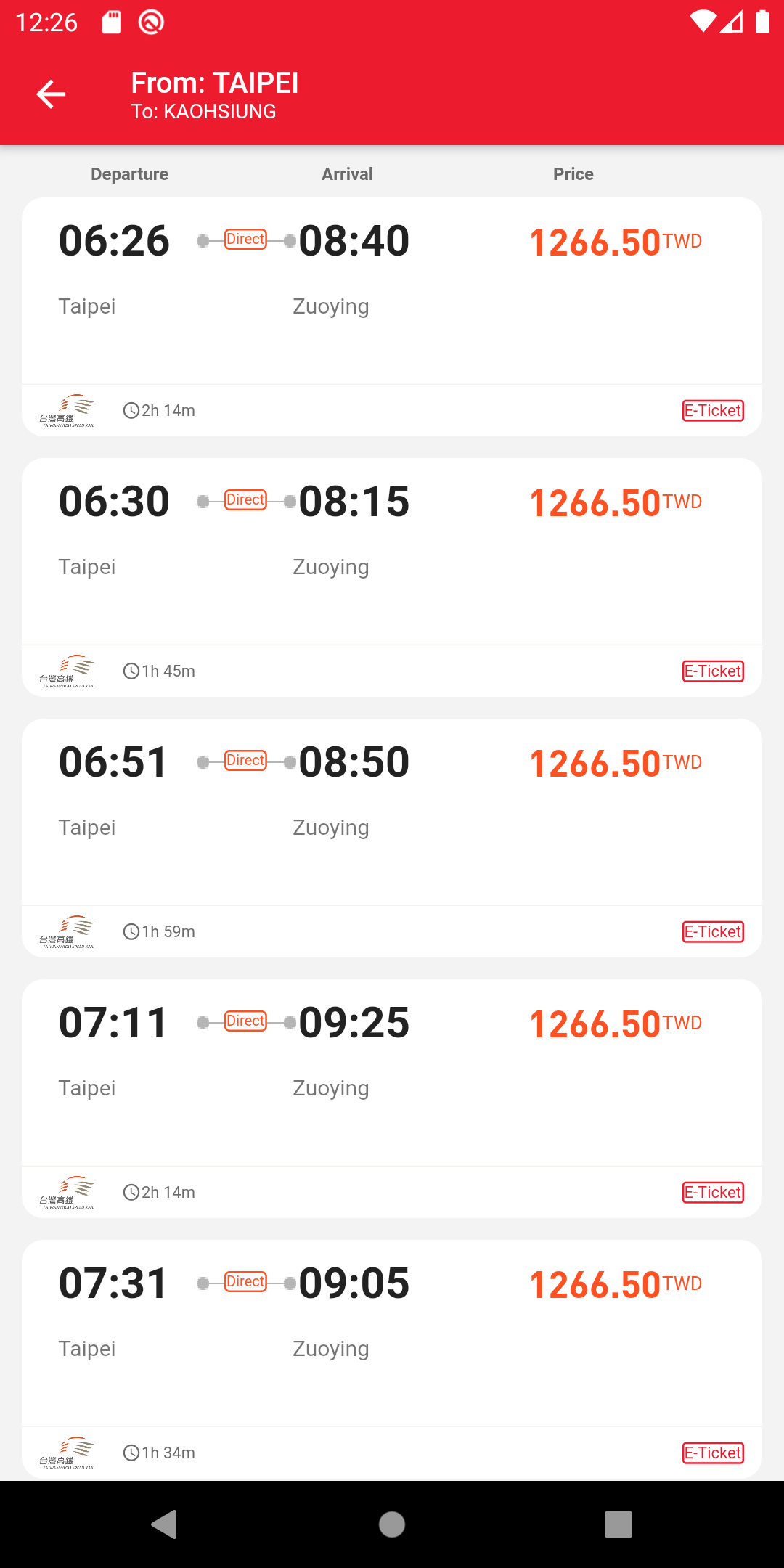 The sooner the high-speed rail is booked, the cheaper it will be. From the 28th to the 5th day before the ride, the sale starts from 35% off, and it is 20% off and 10% off when sold out. Because it is a limited edition, you have to do it quickly if you want to buy it!

Starting from the day of first use for 30 consecutive days, you can take an unlimited number of free seats and you can only use it for yourself. If you use it twice a day, it is almost 48% off the normal fare, which is very cost-effective for commuters across counties and cities.

As a senior foodie, I must mention the Taiwan Railway Bento, which is well-known throughout the island. Taiwan's high-speed rail has catering and beverage sales services, but the high-speed rail time is short, and it is really not necessary to eat in the car. The Eastern Taiwan Railway is different. It usually takes 4-5 hours to travel from Hualien to Kaohsiung or Kaohsiung to Hualien, requiring a dinner in the car. Taiwan Railway’s most famous Chishang Bento, which looks like a Japanese name is actually the place name of Chishang Township in Taitung County. The natural conditions here are particularly suitable for rice cultivation. Chishang rice is a specialty of Taitung, so the bento here in Chishang (I have seen Everyone in Doraemon knows that a bento is a box lunch) and it became popular with the number of passengers taking the Taiwan Railway. Don’t miss this place if you travel across Chishang by Taiwan Railway. The parking time of the Taiwan Railway is very short, especially for small stations like Chishang. You must prepare change in advance (usually 80-100NT), and then rush down to the platform to buy the bento and enjoy it slowly. . Although Chishang Bento is not a peerless delicacy, its packaging, history, and conscience price over the years absolutely kill the 20-30 yuan box lunch on our railway. There are several options for bento. Common ones include ribs bento, chicken leg bento, and vegetarian bento. The price ranges from 60 to 100 yuan. The editor likes the Taiwanese pork ribs bento in the octagonal box. It costs 80 yuan each. The white rice is served with pork ribs, fried fish fillet, marinated eggs, and vegetables. It is economical and delicious.

If you don't buy bento at the train station, there will be service staff on the train (except shuttle bus) pushing the dining car for sale. Even if you don't take a train, you can buy a bento at the "Taiwan Railway Bento Shop" at Taipei Main Station.

In addition, the latest service of Taiwan Railways is that you can order a Taiwan Railway ticket when you order a ticket. If the service provides a "bento delivery" service, you can directly book the bento, and a service staff will deliver the bento to you. seat.

In the case of matching seats, each train has a standard car and a business car.

Free tickets can be used in free-seat compartments at any time and on the same day, so there are no seats available. It is suitable for passengers who buy tickets temporarily or are in a hurry. Each train has a free-seat compartment, generally the 10th to 12th sections.