The Spanish Railways (Renfe) has more than 2,000 stations and 2,270 kilometers of railway. Train travel means you can choose from a variety of options to integrate the countryside with the city and the coastline. In terms of AVE high-speed options, there is a lot of information to help you start planning your route.

Madrid and Barcelona are connected by a short two-and-a-half hour journey, and these two cities form the main hub using AVE Spain as a starting or ending point.

Traveling to Spain by train is now easier than ever-whether from England, France or elsewhere in Western and Central Europe. The new high-speed TGV service from Paris to Barcelona started in 2013, and Barcelona now has direct day trains from more than a dozen cities in France, including Lyon, Toulouse and Carcassonne. The capital, Madrid, also has direct trains from Marseille, Avignon and Montpellier.

On the Atlantic coast, the modern TGV Atlantique train runs daily from Paris to Irun, revolutionizing travel between the French capital and the Basque region. The train departs from Irun through Spain and goes straight to Madrid, Santiago de Compostela, Burgos, Zaragoza and many other cities. The Madrid to Lisbon night train also provides Trenhotel service.

With such a good service, it is easy to plan same-day connections from London to Barcelona or London to Irún and other areas. You can book train travel to and from Spain through G2Rail, as well as tickets for Renfe all over the country and local services. You will find that the promotional fare of the second class (Turista Class) is very worthwhile, and the first class (Preferente) is very worth upgrading.

As long as you hold a Preferente ticket for the first-class car, you can enter the VIP room within 2 hours before the train departure. The interiors of the Sala Club in different stations are similar, which is convenient for people on business trips, but not every station has a VIP lounge.

The interior of the VIP room 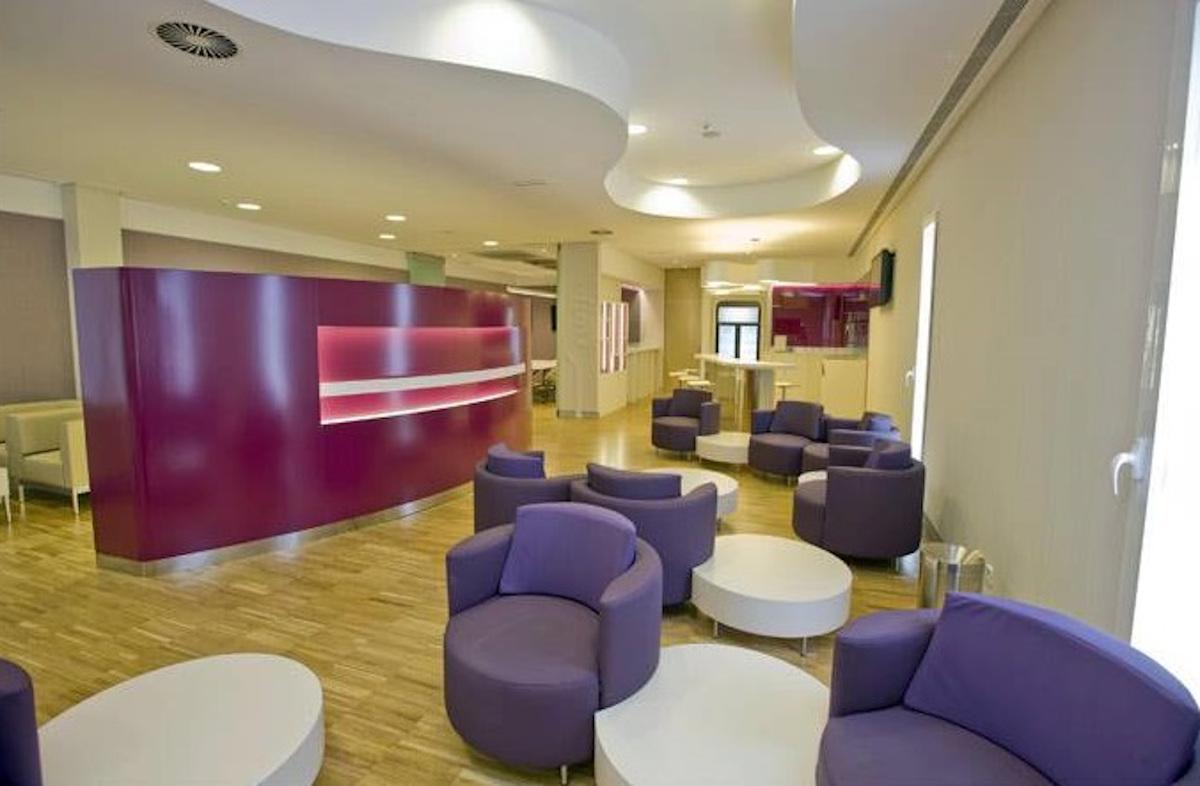 Dining in the VIP room 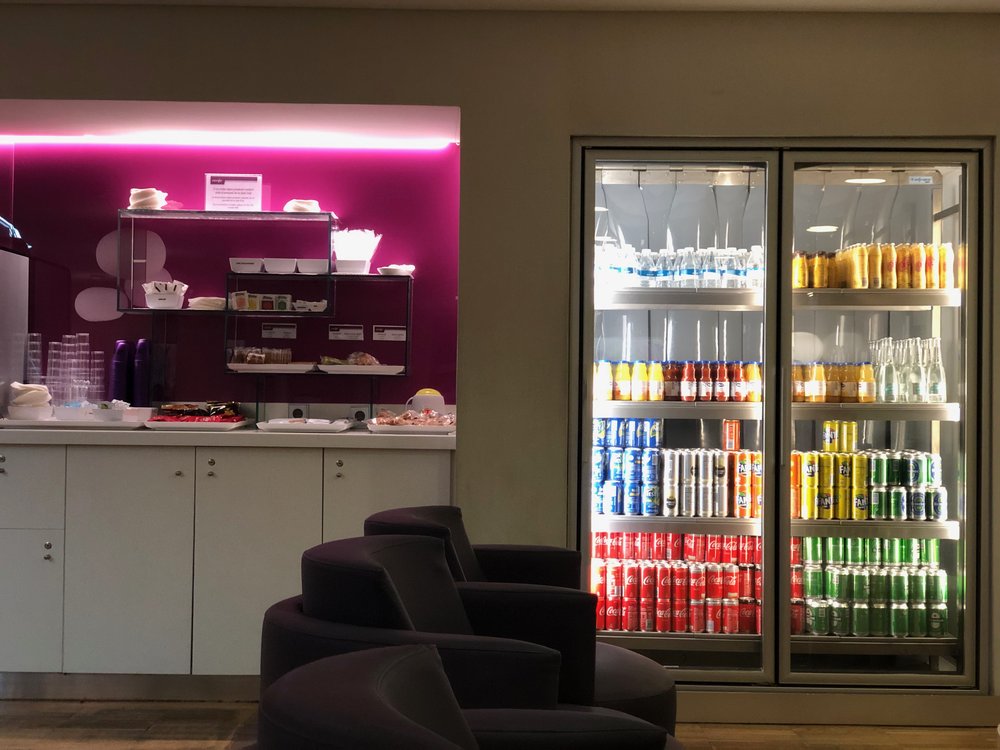 All passenger trains are operated by Renfe, whose acronym stands for Red Nacional de los Ferrocarriles Españoles. Spain has a railway network of nearly 16,000 kilometers (about 10,000 miles). In other words, the network covers almost all villages in the country.

If you have long-distance travel, Renfe's Larga Distancia series of high-speed trains have several options.

The highest grade is the super high-speed train AVE (Alta Velocidad Española), which travels at a speed of 310 km/h (193 mph). It will take you to your final destination in less than half of the driving time. 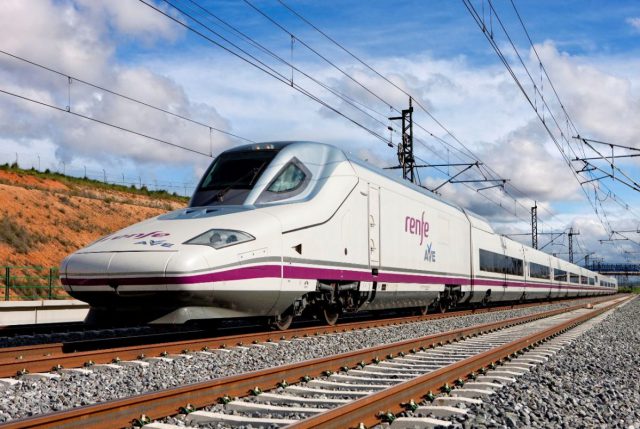 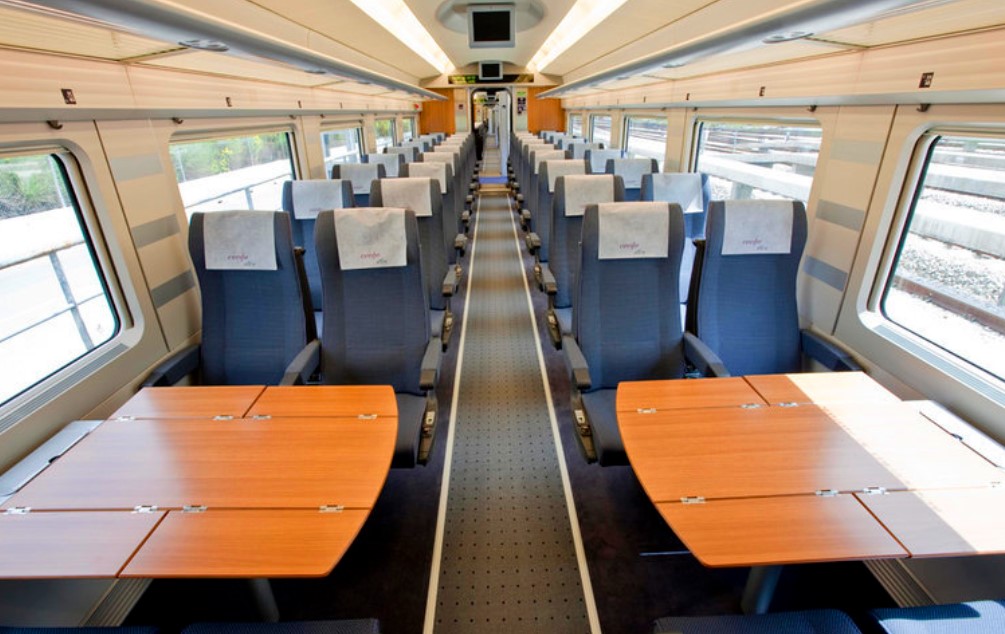 Preferente first-class carriages provide impromptu dining and bar services, just like airplanes. But be warned: no food/bar service on Saturdays. 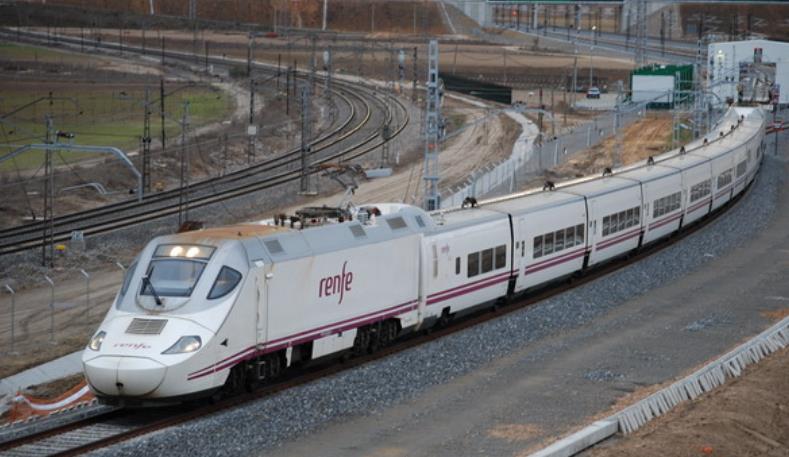 Alvia is a second-class long-distance high-speed rail operated by Renfe, with a top speed of 250 km/h (155 mph). Trains can use Iberian gauge and standard European tracks, which allows them to travel on recently constructed high-speed lines. Alvia has many routes mainly from Madrid and Barcelona. 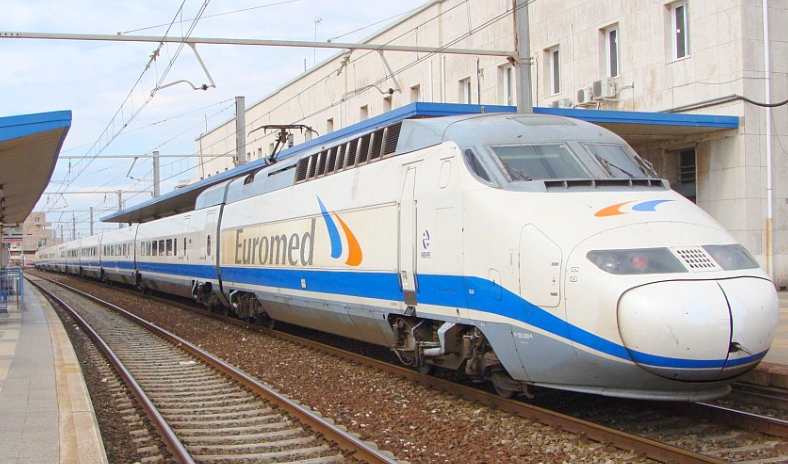 Similarly, the Euromed high-speed train connects Barcelona with Alicante, stopping at Tarragona, Castellón and Valencia. It is actually an Alvia train with a different name. 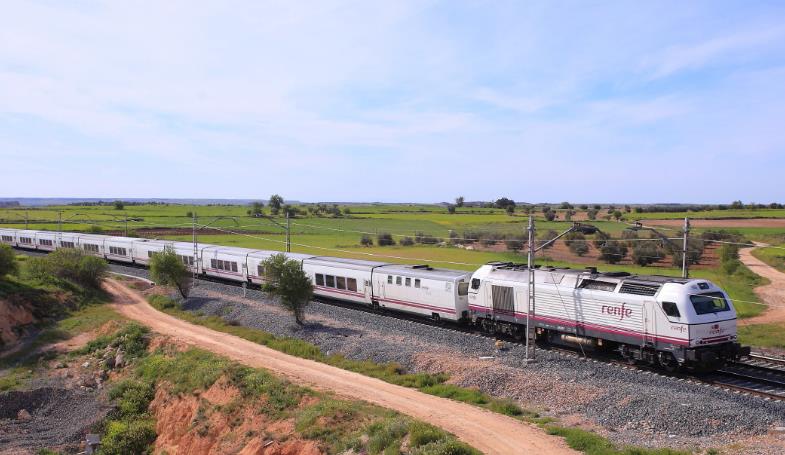 The third option is the Altaria train. It runs on two main routes: Madrid-Algeciras and Madrid-Cartagena (Cartagena), stop in Murcia (Murcia).

This is a small articulated train towed by a separate locomotive, which can travel up to 200 km/h (125 mph) on the high-speed AVE line. All Altaria trains have a coffee bar. 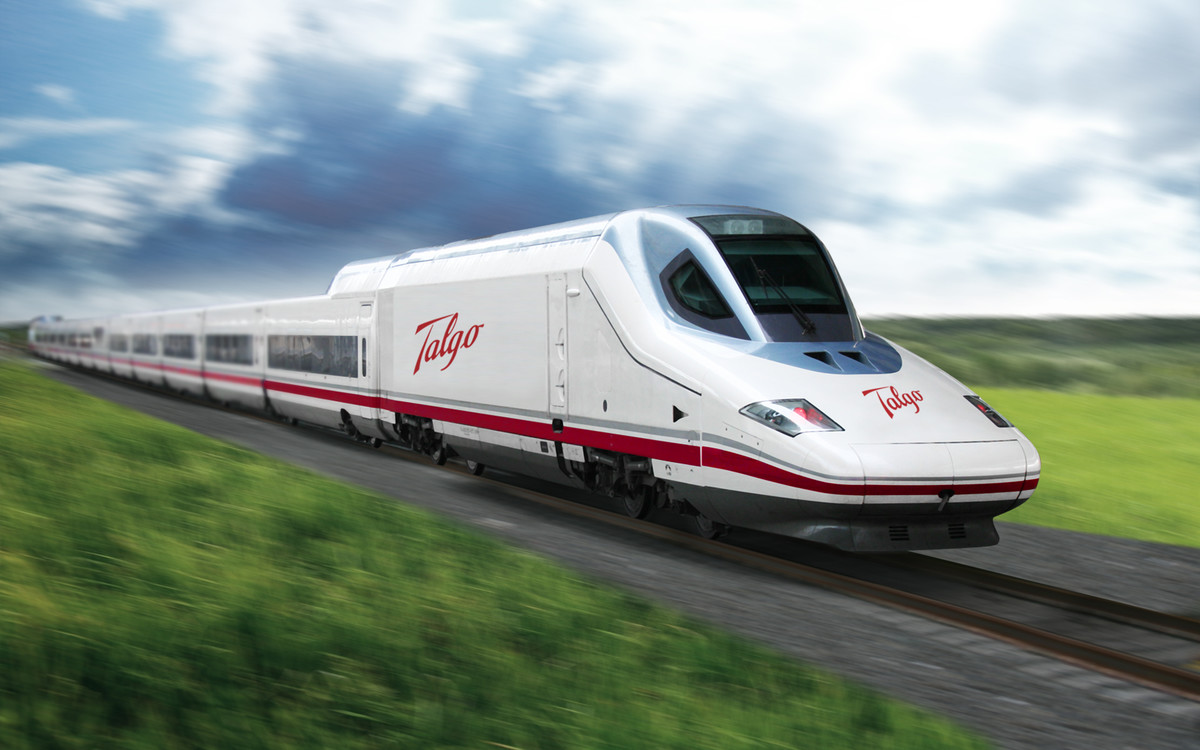 The trains running on the Talgo railway system are fast and have air conditioning systems. The running route covers most of Spain, and its stops are mainly in large cities. Among them, Talgo200 is a high-speed train that only runs from Madrid to Malaga and Cadiz. 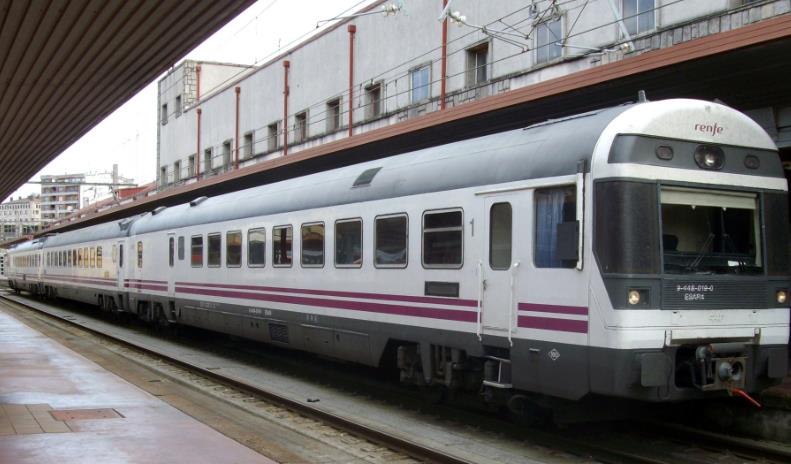 Intercity trains run between 160 and 250 km/h and can reach almost every corner of Spain. You can choose second class (Turista) or first class (Preferente). The comfort of the carriage is close to that of the high-speed AVE train. All trains are air-conditioned. 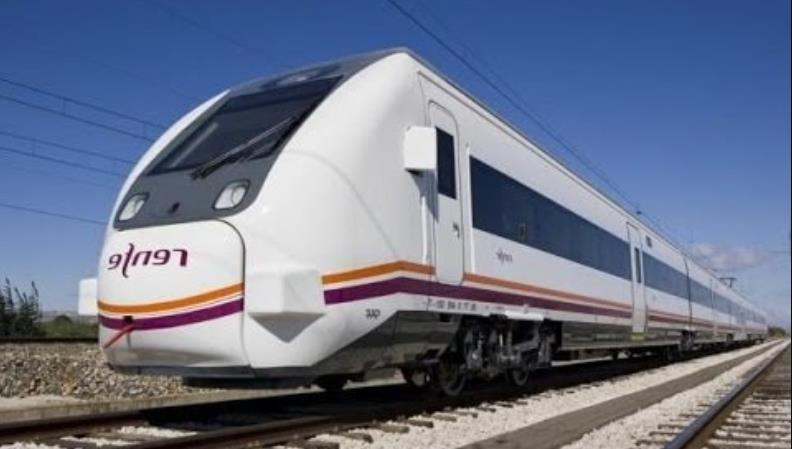 They are called Media Distancia (Regional Train) and Avant trains. The Media Distancia train covers the whole country. These trains are also very modern and very punctual, but they are not as fast as long-distance trains. 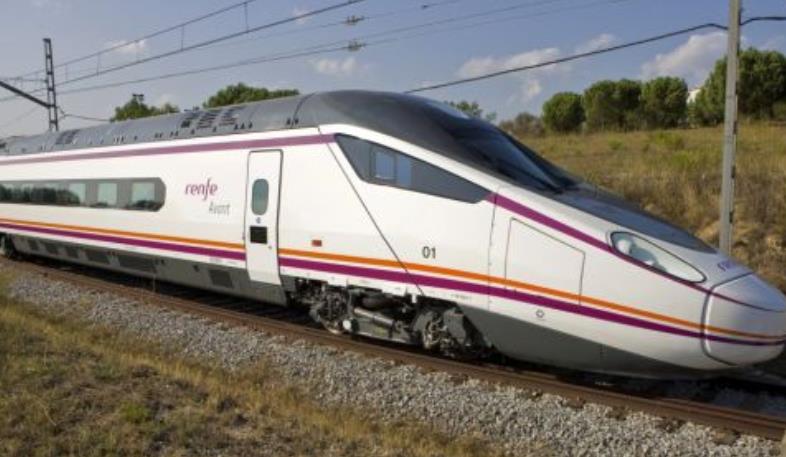 Trenhotel is a long-distance, high-quality overnight regional train service using Talgo tilt train technology and sleeper trains developed by the Spanish rail network operator Renfe. It is operated by Renfe while operating in Spain and its subsidiary Elipsos is operated in France, Switzerland and Italy. 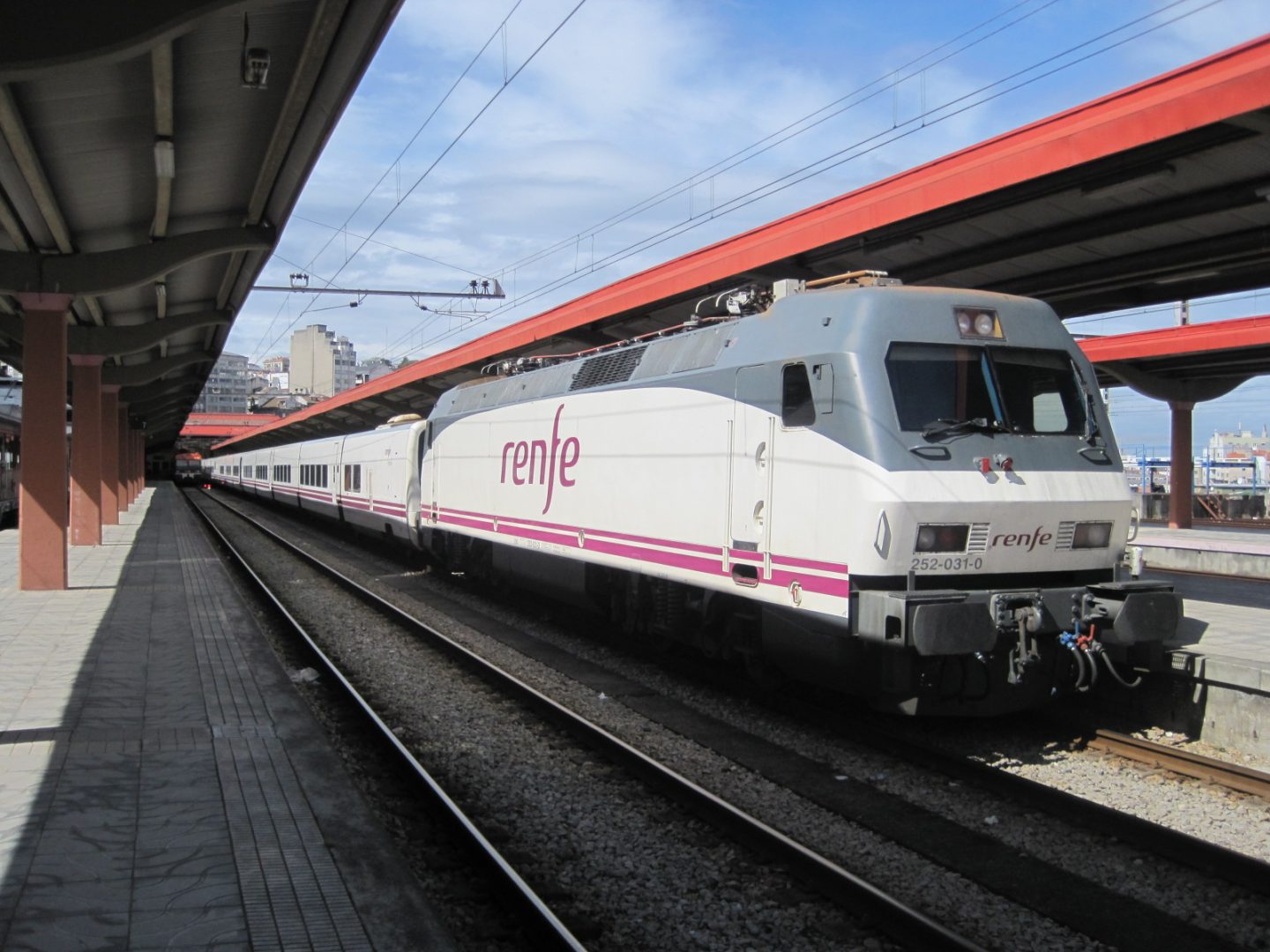 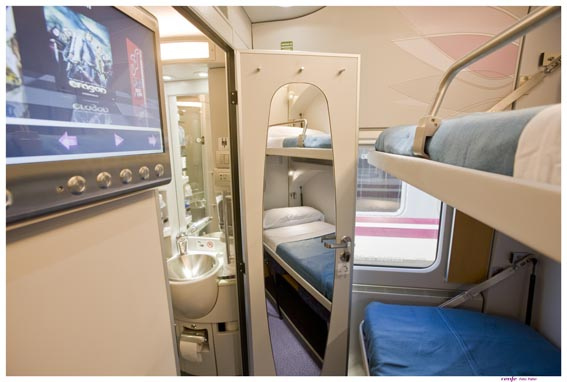 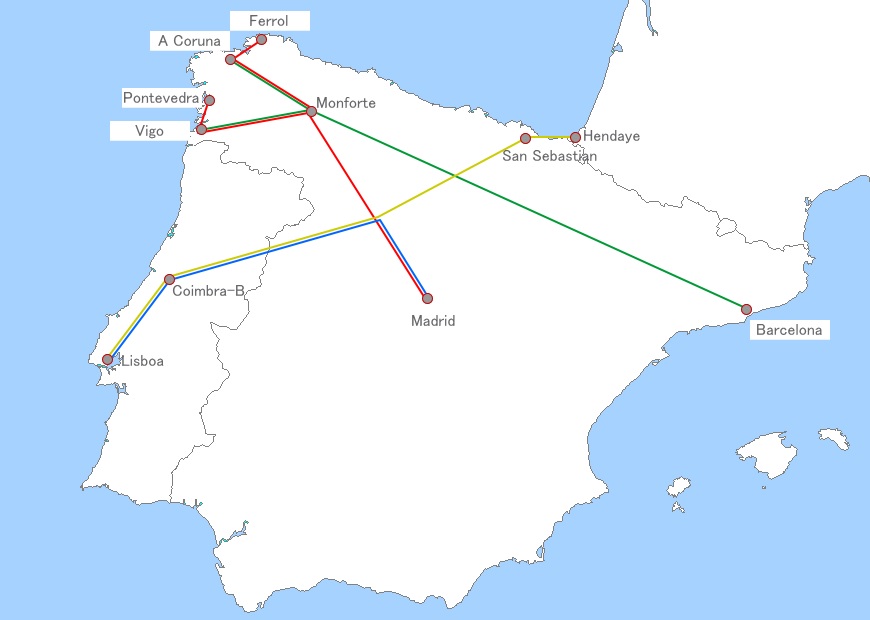 The commuter rail service or suburban train in Spain is called Cercanías. These are suburban trains that cover large cities (including Madrid, Barcelona, ​​Bilbao, Seville and Valencia) or small administrative areas (Asturias) ), Murcia (Murcia)). Areas that provide commuter trains include:

There are more than one train station in major cities such as Madrid and Barcelona. To go to different destinations, you need to depart from a specific station; sometimes even the same destination, high-speed trains and ordinary trains have different departure stations, so buy tickets Be sure to confirm it first.

Whether you need to buy tickets on the spot, enter the train station, the timetable is the main goal you are looking for. There is an electronic timetable in the lobby of each train station, which shows the train schedules that are about to enter and depart. It will show the type of train, departure time and destination, and most importantly, you can see the incoming trains Platform number.

Find the platform and confirm the train and car

Each platform is also equipped with electronic billboards, which display the train number, departure time and destination of the upcoming train. You may wish to check again after entering the platform. All information is correct, just wait for the train to enter the station.

Taking a train in Spain often faces a difficulty: the platform does not indicate which car number will probably stay on the platform. Even the car number markings on the body of some trains are not very clear, so even if you remember Know your car number, and often can't find a suitable car without feeling a little flustered. It is recommended that you take the train to the platform earlier and wait. If you have any problems, consult the station staff nearby. It is less likely to accidentally miss the bus.

Check the ticket and luggage

When taking Avant, AVE grade high-speed trains and long-distance express night trains in Spain, not only tickets and passports will be checked, but luggage must also pass X-ray inspection. The rigorous process is second only to flying, so please allow more time for trains. So as not to be too rushed to cause missed shifts.

We recommend that you arrive at the train station about 20 minutes before the train departs in order to find your platform. On high-speed trains, you need to go through security, but it should only add an extra few minutes to your journey.

Before boarding the train, there is a special cordon area. You must pass the security check before the train leaves before you can board the train.

The doors of Spanish trains do not open automatically. If the door is closed, remember to press the button to open the door.

The seat number in the carriage is quite clearly marked, and you can find it by following the row number and number.

Check the ticket on the car

The ticket checking of Spanish trains is very strict. If you are buying a train pass, you must remember to fill in the date of use before getting on the train, otherwise you may be fined; you must also show the reservation and premium if you take the train that requires reservation or make up the difference Tickets, otherwise you will be fined.

Get off at the station

Basically, Spanish trains are very punctual, and you can judge when to get off according to the time marked on the timetable. In addition, with the exception of a few trains, the front of most train cars will have a screen showing the name and time of the upcoming station, or broadcast it in Spanish and English, and you will not have taken the station if you pay attention.