Trains are one of the best means of transportation when traveling between cities in Korea. South Korean trains are divided into three levels according to the speed of the train and the conveniences in the train: the first level is high-speed railway, including KTX and KTX-Shanchuan trains. The second level is electric EMU, including ITX Youth, ITX Xincun and Nuriro. The third level is diesel EMUs, including Infinity Flower, Xincun, diesel-electric commuter trains and sightseeing trains, and the prices are also different. The Gyeongbu Line and the Honam Line are the main hubs of Korean Railways. In addition, there are Jeolla Line and Gyeongjeon Line that connect Yeosu, Changwon and other regions, and Gyeongui Line, Gyeongchun Line, Jungang Line and Donghae Electric Railway that connect various places. line.

At present, South Korea has launched a KORAIL PASS for foreigners who can take KTX and general trains unlimited times within a specified period. Tourists can enjoy the fun of train travel at a reasonable price.

South Korean trains are divided into three levels according to the speed of the train and the conveniences in the train: the first level is high-speed railway, including KTX and KTX-Shanchuan trains. The second level is electric EMU, including ITX Youth, ITX Xincun and Nuriro. The third level is diesel EMUs, including Infinity Flower, Xincun, diesel-electric commuter trains and sightseeing trains, and the prices are also different. The Gyeongbu Line and the Honam Line are the main hubs of Korean Railways. In addition, there are Jeolla Line and Gyeongjeon Line that connect Yeosu, Changwon and other regions, and Gyeongui Line, Gyeongchun Line, Jungang Line and Donghae Electric Railway that connect various regions. line.

From the xmove App, you can check the frequency and fare of different types of Korean Railways. 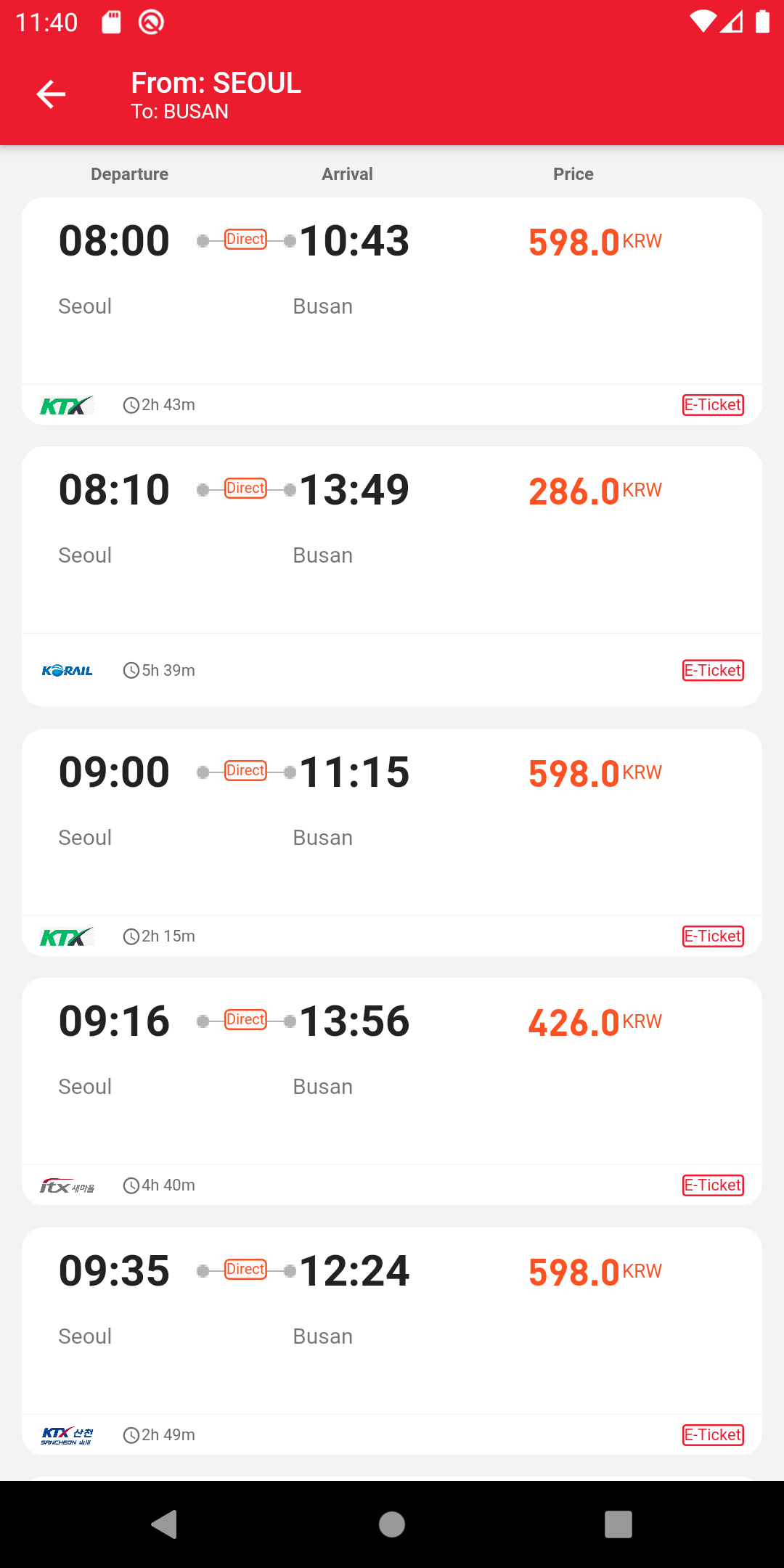 Each country has a different definition of high-speed railway, and South Korea's high-speed railway can travel at a speed of at least 330 kilometers per hour, and the fastest can reach 305 kilometers. You can enjoy more scenery by taking a high-speed train than by an airplane, and it is faster and more punctual than a car or ordinary train.

KTX is operated by Korea Railway (Korail) and was built in 1994. After the Asian financial crisis, South Korea's economic development revived, and KTX was quickly built. KTX uses the French TGV-A push-pull high-speed EMU, with a total of 46 units, of which 12 units are manufactured in Alstom, France, and the remaining 34 units are manufactured in Korea. Known as "one of the top ten trains in the world". It was officially opened on April 1, 2004. KTX has 20 carriages, of which two are power units, two are motor vehicles, and sixteen are passenger trains. KTX does not have a dining car to increase passenger capacity. 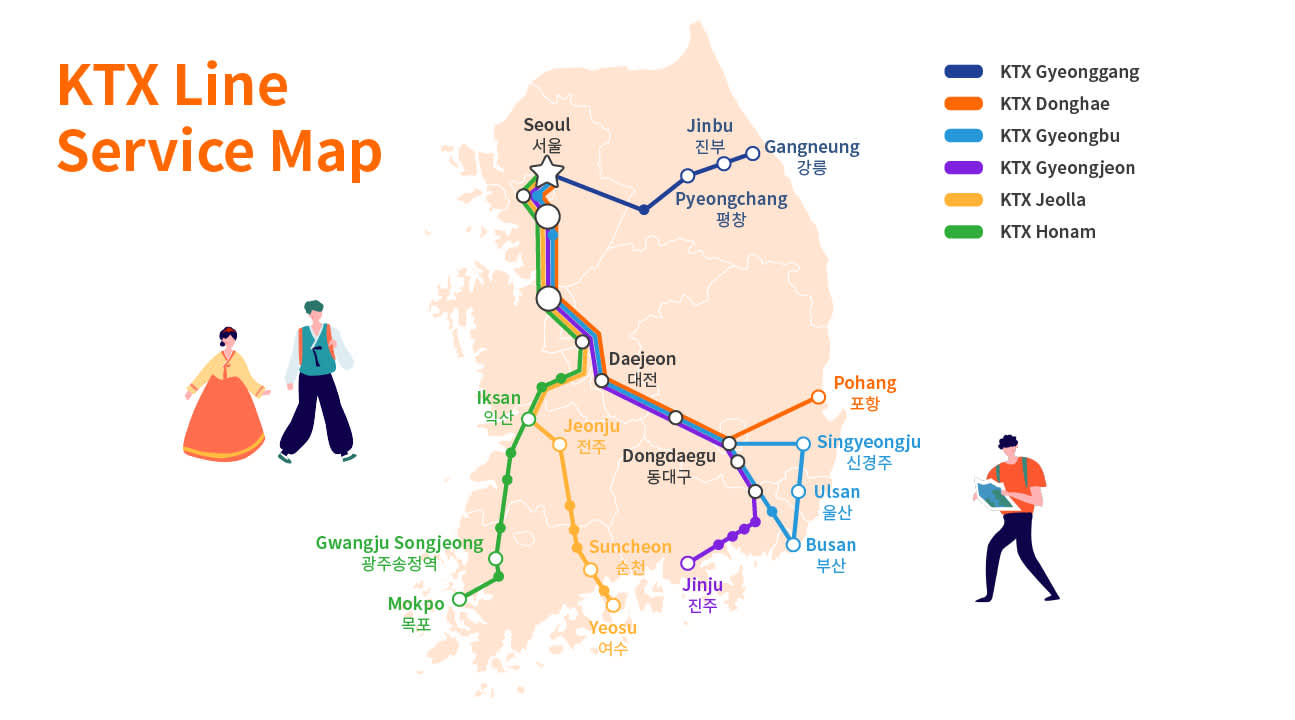 Currently, there are 4 routes for the KTX high-speed train, and the station is different depending on the route, so please confirm carefully. 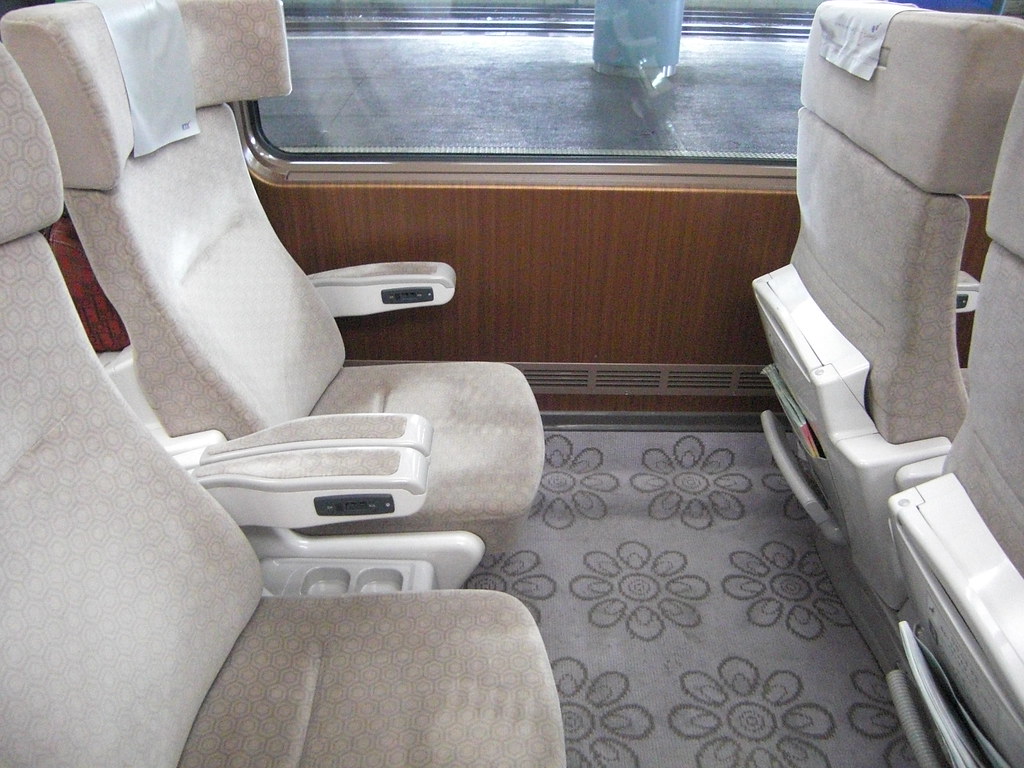 The KTX Yamakawa, which started operation on March 2, 2010, was formerly known as KTX-II, and was the first high-speed train in South Korea to be manufactured entirely using domestic R&D technology. It not only eliminates the disadvantages of narrow seats and inability to adjust direction in ordinary carriages of the first-generation KTX high-speed trains, but also improves service specifications and adds business seats and fast food bars. The KTX Shanchuan was put into operation on the Gyeongbu Line and Hunan Line on March 2, 2010. The KTX Shanchuan has ten cars, of which two are power cars and eight are passenger trains. The seats are divided into first-class and standard seats. The first-class seats have thirty seats, with every three seats in a row. The standard seat has 333 seats, and each row has four seats. All seats can be rotated. ITX-Young (Korean: ITX-청춘) is one of the electric trains of the Korea Railway Corporation. It started operating on the Metropolitan Electric Railway Central Line and Gyeongchun Line on February 28, 2012, and then on May 1, 2017. Started operations on the Gyeongbu Line. After the electrification of the Gyeongchun Line in 2010, the Korea Railway Corporation plans to replace the Infinity Flower and Nuriro on the Gyeongchun Line with new trains. Finally, after the train left the factory on September 25, 2011, it was decided to be named ITX-Youth. The ITX Gyeongchun Line runs between Yongsan Station and Chuncheon Station and is an express train. Passengers can board the train at Yongsan Station, Oksu Station, Wangshili Station and Cheongnyangni Station in Seoul. The stop station will vary according to the date and time zone, and all ITX Youth Trains stop at Yongsan Station, Cheongnyangni Station, Gapyeong Station, Namchuncheon Station and Chuncheon Station. Starting in 2017, the ITX Youth Train on the Gyeongbu Line from Yongsan Station in Seoul to Daejeon Station was officially opened. You can take trains at Yongsan Station, Noryangjin Station, and Sindorim Station in Seoul, and you can easily transfer to subway lines 1, 2, and 9. Although there is no difference between the stops, the train schedule may be different on different days, so be careful when you ride. The ticket is divided into general seat ticket and station ticket.

The introduction of ITX-Saemaul (ITX-Saemaul) aims to replace all the old Xincun trains by 2018. It began to run on major Korean railway lines such as the Gyeongbu Line, the Honam Line, and the Jeolla Line on May 12, 2014. The maximum speed of the train is 150 kilometers per hour. After the announcement of the train, a naming vote was held, and the old name "Sincun" was elected after the new village movement led by President Park Zhengxi. The stations passed by the Xincun number are as follows:

ITX-Xincun has only standard seats and no first-class seats 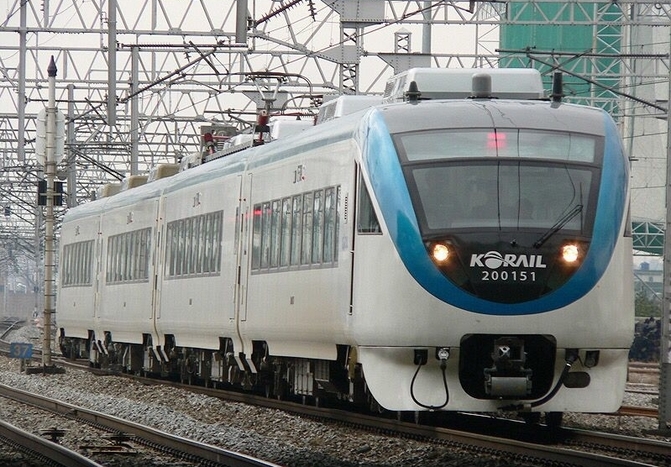 The Nuriro, or Nooriro (Korean: 누리로) is one of the quasi-high-speed railway trains of the Korea Railway Corporation. It started operating on the Gyeongbu Line and Changhang Line on June 1, 2009, and on March 31, 2010. Operation of Chungbuk Line. After the electrification of the Changhang Line on December 15, 2008, the southernmost terminus of Metro Line 1 of the Capital Circle extended to Xinchang Station. The Korea Railway Corporation began to replace the Infinity Flower train with Nuriro trains in the Seoul-Shinchang section of Metro Line 1 on June 1, 2009. On March 31, 2010, the Seoul-Jecheon section was opened again, and the original Mujeonghwa train replaced the Sinchon route in 2015. In addition, before ITX-Youth appeared, the Nuririo train also ran on the Jingchun Line from December 25, 2010 to February 28, 2012. Trains currently operate on the following railway lines:

The Sinchon (새마을호, Saemaul ho) was Korea’s most advanced railway passenger car before the high-speed railway opened to traffic. The Xincun number generally consists of 5-12 carriages. Compared with the next-level Infinity Flower, Xincun is more spacious and has no station. In terms of color, the new village number is mainly green, white and yellow. On the other hand, the Sinchon line is concentrated on the main line. For example, when traveling between Seoul and Busan, the Gyeongbu Line will be used instead of the Joongang Line (since November 2006).

The cabins of Xincun are divided into first class and standard. The first class has wide seats, light adjustment equipment, personal reading lights, rotatable and adjustable seats, feet, back folders and tables. The train can carry 376 people, and all trains have double general seats. There are also service facilities such as vending machines, LCD monitors, maternity rooms, electric tea stoves, and free Wi-Fi service in the train. Each train has a coffee cabin, which has a canteen and leisure facilities such as computers, game consoles, karaoke rooms and massage chairs.

The Mugunghwa ho (무궁화호/Mugunghwa ho) is the lowest-priced passenger train type in the Korean National Railways network. It is now generally operated on the main railway sections and some branch railways in Korea that have not been electrified. The train began to run on the Gyeongbu Line and the Gyeongsang Province on April 15, 2008. It now runs on most of the routes in southern Korea. The operation of Infinity Flower began on January 1, 1984. Before South Korea's high-speed rail opened in 2004, the Infinity Flower was the most common passenger car in the area. On rural routes such as the Gyeongbuk Line, the Mujonghwa is the only train used, and it stops at every station.

Unlike the high-speed train and the Xincun, the Infinite Flower can accommodate more passengers and has more stations. There are light adjusters, personal reading lights, automatic doors, adjustable and rotating seats and toilets in the train. Each train has a coffee cabin, which has a canteen and leisure facilities such as computers, game consoles, karaoke rooms and massage chairs. Infinity Flower is named after Korea's national flower-Infinity Flower (Hibiscus)

Tickets can be purchased at the following places of purchase; G2Rail website, designated travel agencies and KORAIL Visitor Center

Designated seats: One person can purchase two tickets for designated seats per day. Passengers can only book travel dates and train numbers within the validity period of the PASS. Tickets are open for booking from one month before the train departure date. Due to the implementation of separate management during the peak period of Korean holiday passenger transportation, the pre-sale will be opened from the designated date on the other route. If seats are sold out, passengers will not be able to reserve seats. If this happens, please bring a valid KORAIL PASS and passport to use a standing seat (standing). After using the designated seat opportunity (more than two rides in the car), please bring a valid RAIL PASS and passport to ride the seat. Tickets cannot be booked repeatedly within the section that cannot be reached within the same day. Therefore, useless seat tickets should be cancelled in the "Usage History" menu or at the station window.

Use time of optional 2-day ticket and optional 4-day ticket: The optional ticket must first specify the travel date before you can reserve seats on the same day.

From the xmove App, you can directly inquire about the timetable and price of various trains of Korea Railway, or you can directly place an order to buy a ticket. Korean Railway train tickets are electronic tickets. 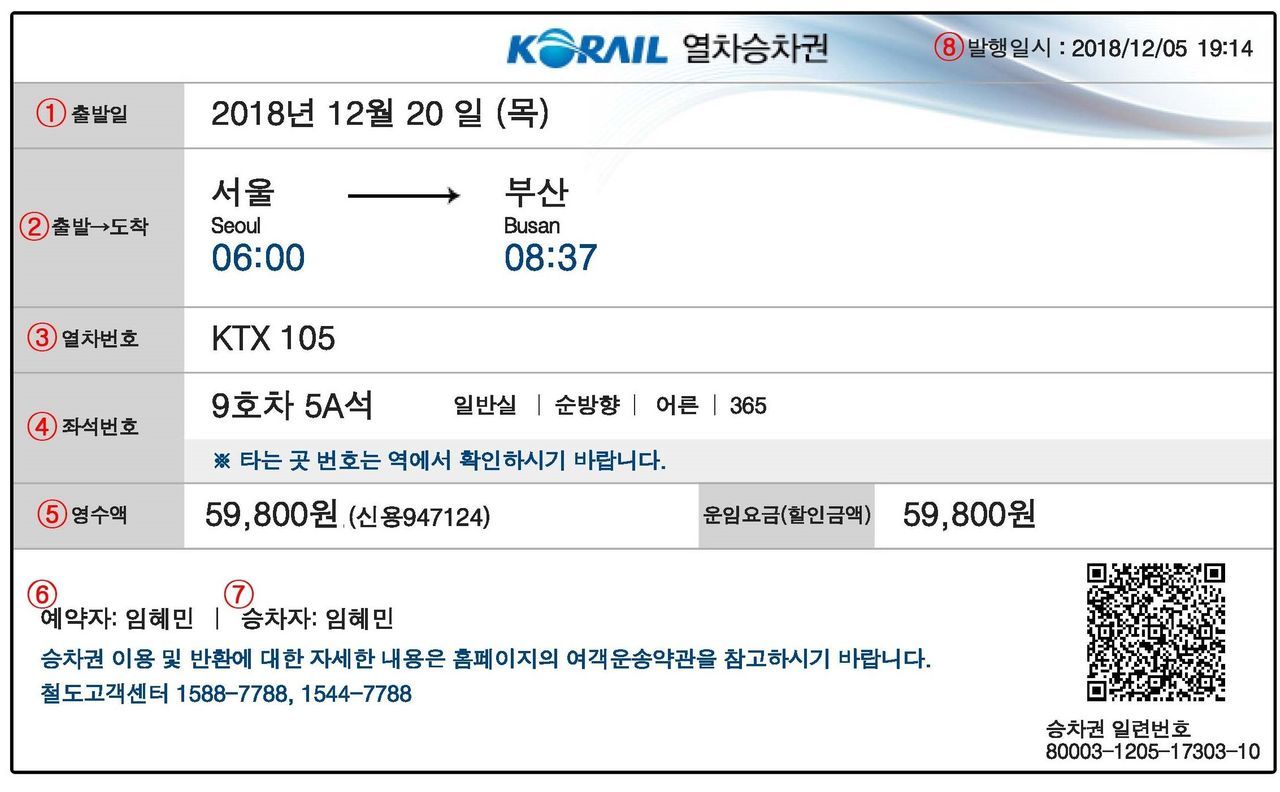 The discount method of Korean railway ticket prices is different from other railway companies. The KTX train is 40% more expensive than the Saemaul train (while the KTX 1st train is 40% more expensive). Saemaul First Class fares are 22% higher than standard Saemaul fares. The standard fare of Saemaul is 50% higher than the Mugunghwa grade. If you buy KTX tickets 7 to 30 days before departure, you can enjoy a discount of 7% to 20%. From Monday to Friday, tickets can enjoy a 15% discount; and ipseokpyo (stand-up tickets) can be discounted 15% to 30% according to the length of the journey. With a standing ticket, you can sit on any unused seat. Children can travel at half price at any time; seniors over 65 can enjoy a 30% discount from Monday to Friday.

Passengers can purchase tickets one month in advance. It is recommended to book a seat on weekends, holidays or busy times.

Check the ticket on the car

Korean trains do not check the fare, the conductor just checks the head of the person according to the position to check whether someone has escaped the fare.

Generally, Korean train stations have luggage deposit boxes inside the train gates, which can easily solve your heavy luggage。