Ferrari, the French National Railways and Tod's boutiques have jointly launched a high-speed train "ITALO" that is also a symbol of performance. The red body, streamlined appearance, and the speed of 300 kilometers per hour, make people Think of Ferrari supercars. High-end luxury boxes, all seats are designed and manufactured by the boutique brand TOD'S. In addition to spacious and comfortable seats, there are theater cars and touch screens, making train rides a high-end luxury enjoyment. The compartments are divided into first-class compartment Club, business compartment Prima and standard compartment Smart. All three compartments have free wireless internet service. The biggest difference between the three compartments is the spaciousness and comfort of the seats. The first-class carriages also have a 9-inch touch screen to show movies and TV shows.

Italo is similar to Ferrari because it is the Italian private railway company NTV founded by Ferrari and Express Depot Chairman Di Montezemolo (Lcua Cordero di Montezemolo). The new generation of high-speed trains, the red body, whether in the railway station or in the mountains, you can recognize Italo at a glance. The Italo high-speed train currently runs in nine cities in Italy, with an average speed of 300 kilometers per hour. It is compatible with French TGV trains, German ICE trains, Japan's Shinkansen in Asia, and the Beijing-Hong Kong high-speed rail from Mainland China to Hong Kong. Like trains, they are modern high-speed railway trains.

Di Montezemolo said that the top speed of Italo will be increased to 360 kilometers per hour, and she is known as "the most avant-garde and fastest train in Europe." The red body is smooth and beautiful, the golden horn of Phnom Penh is more noble, and the body is wider than the traditional French high-speed train TGV.

Based on the technology of the latest generation of ultra-high-speed AGV Alstom trains, the driving system is distributed under the entire train instead of concentrated on the special locomotives before and after the train. This innovative concept makes it possible to eliminate locomotives and use the free space to accommodate more passengers (onboard capacity increased by 20%). Its articulated train set architecture has distributed power, and it also eliminates most of the vibration and noise generated by vehicle movement, absorbs the movement between vehicles, optimizes the aerodynamic performance of the train, ensures the best safety and saves 15% maintenance cost. All in all, this innovative technical solution is combined with composite materials and, by improving the efficiency of the traction system, enables it to reduce the mass of the Italo train, making it 70 tons lighter than the competition. Therefore, from an environmental point of view, Italo has particularly good performance, saving 15% of energy consumption. In more detail, the main advantages of the new Italo train cover all aspects of performance: power/weight, car space and comfort, power consumption, safety and maintenance.

Ruby red and our unique golden hare, Italo EVO was launched in 2016. It is an evolution of the Pendolino series, a benchmark for high performance and reliability and elegance. Its futuristic front end is designed to provide the driver with collision protection in the event of a collision and improve aerodynamic performance. Another feature of Italo EVO is its drive system, which also allows AGV 575 to set the new wheeled railway world speed record to 574.8 km/h on April 3, 2007. The 22 new Italo EVO trains will increase the size of the Italo fleet from 25 to 47. The first ItaloEVO will start operations in December 2017 and will be perfectly integrated with the 25 AGVs currently in service. Italo EVO trains will be assembled at Alstom production sites in Savigliano (near Cuneo), Sesto San Giovanni (near Milan), and Bologna and Nora warehouses (near Naples) will be repaired 30 Years, because it has been done for Italo AGV trains. Due to its high use of recyclable materials, the train is environmentally friendly and is designed to ensure the reduction of carbon dioxide emissions. Its distributed drive system improves efficiency and generates energy when braking. These trains have a top speed of 250 kilometers per hour, are 187 meters long, are composed of 7 vehicles, and can accommodate approximately 480 passengers. The train fully complies with the latest 2014 TSI [1] regulations formulated by the European Union. For Italo, showing these new trains for the present and the future is a great achievement. In fact, thanks to these 12 new trains, the company will expand its network, increase the frequency of services, and always provide passengers with the best travel solutions. Italo's EVO is part of Alstom's Avelia series of high-speed and ultra-high-speed trains. The Avelia series is based on the current four flagship products-Pendolino, Euroduplex, Liberty and AGV-representing the culmination of 35 years of expertise and more than 1,050 train services worldwide.

Italo bus from Pompeii to Sorrento Search directly from G2Rail to see the class, price, and remaining ticket information of each Italo. 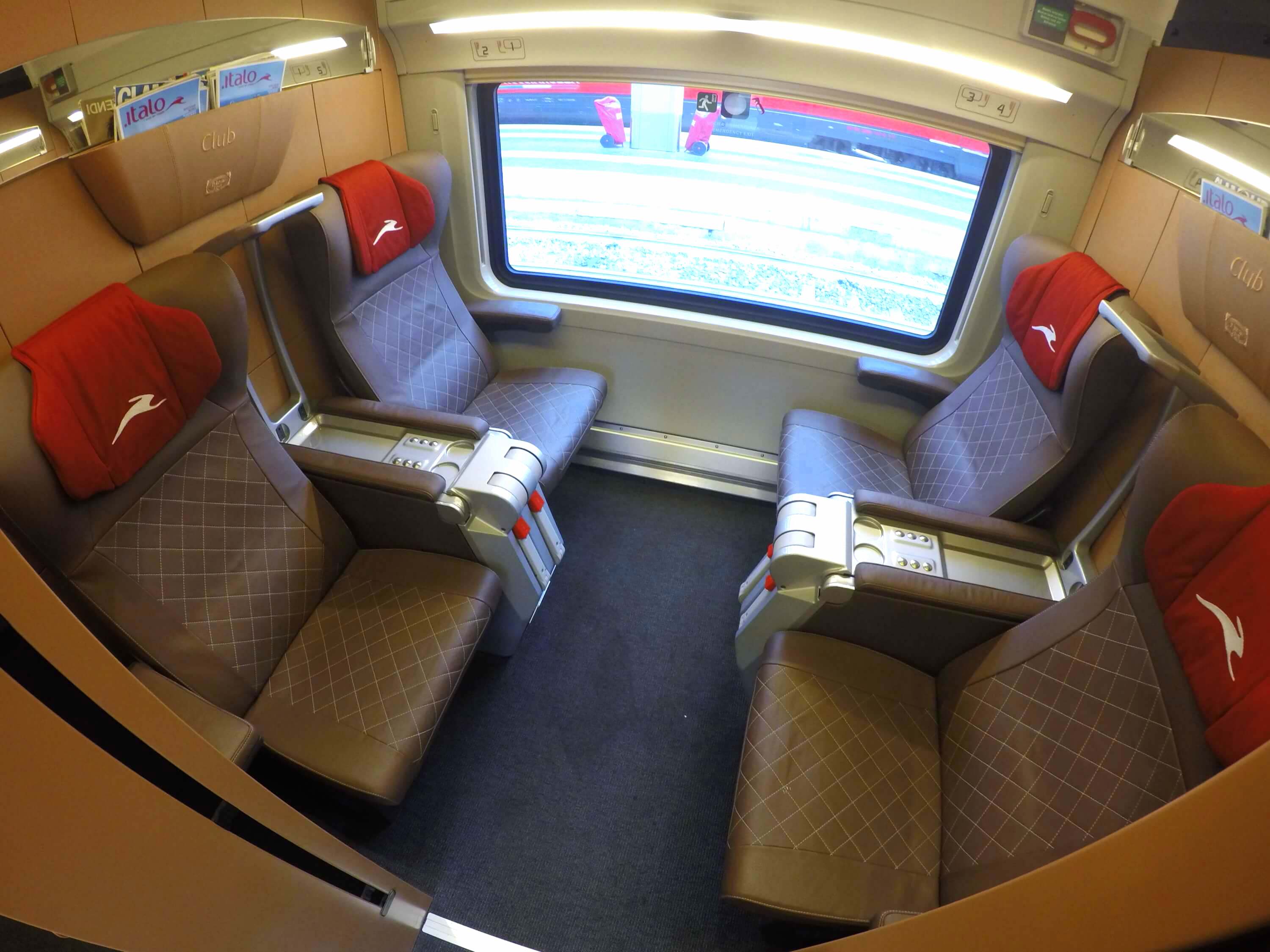 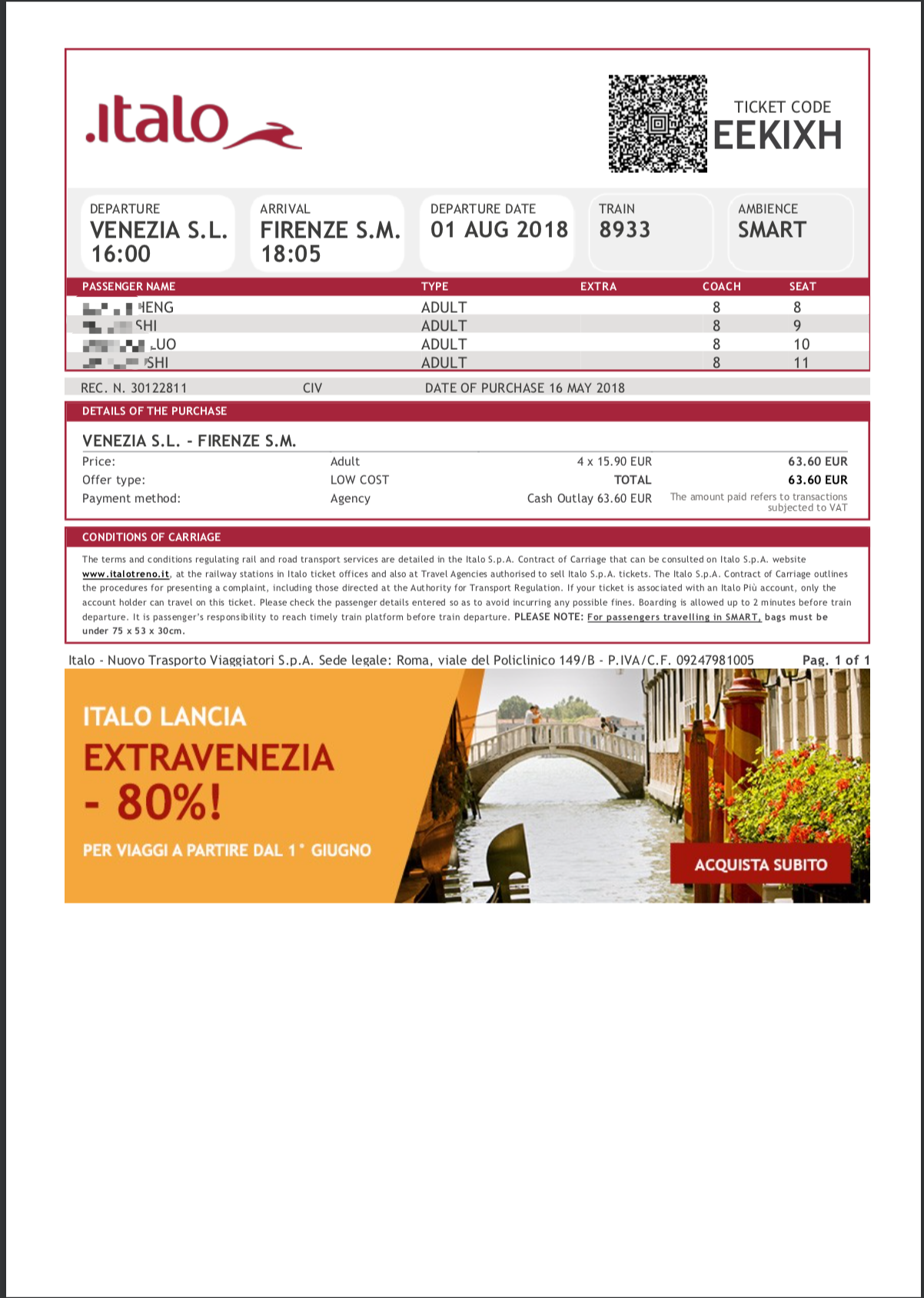 Italo point-to-point tickets are electronic tickets (pdf), which need to be printed on A4 paper.

The Eurail Pass is not applicable to Italo High Speed ​​Rail.

Itano high-speed trains are all seats. Just sit according to your own car number and seat number.

There are no ticket gates on the Italian train platforms. Any left can enter and exit at will, but you will definitely encounter ticket inspectors on the train. Therefore, you must never take a chance to take the king car. If you are caught, the consequences will be very serious, except They have to pay high fines and may be arrested and leave bad records.

Get off at the station

Basically, the trains in Italy can be called punctual. You can judge when to get off according to the time marked on the timetable. However, it is commonplace to get late. It is recommended to check whether the station name is the same as the station name on the ticket when you get off the train.

The train station is a bustling place, especially in big cities. Be careful with your luggage and wallet. Once you get off the train or provide you with transportation, please do not let anyone offer to help you carry your luggage. If you are looking for a taxi, please go to the taxi stand or bus stop outside the station. In cities with a subway system (subway), there is usually a subway station inside the train station.

Of course, on the xmove App, you can monitor the stop and delay information and platform information of the train you are taking, and you can also monitor the real-time station timetable in the App. 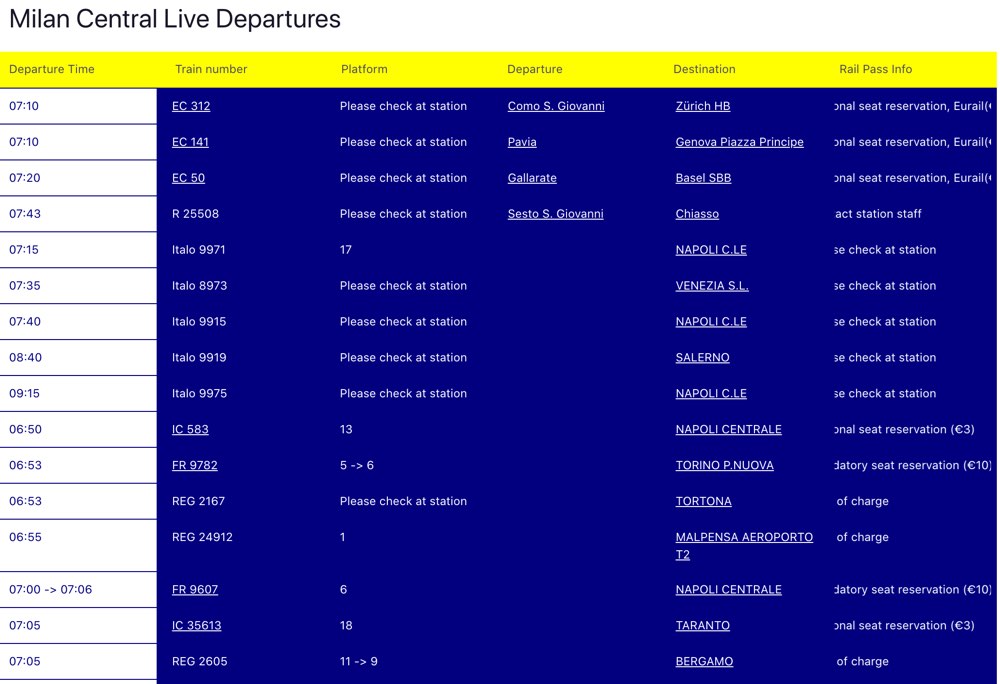